Last October 23 to 26, as every year, FIAC (Contemporary Art International Fair) took place under Paris Grand Palais glass roof and in Louvre Cour Carrée. But this last edition was the theater of an unexpected performance : a police raid.

The Parisian Gallery Rabouan Moussion was showing photos and videos of performances by the russian artist Oleg Kulik. On October 28, a bunch of policemen in plain clothes came in and took away some photos, arguing that they were an offense to mankind dignity and even had a zoophilic character. The instigators of this moral cruisade remain unknown.

One of Oleg Kulik‘s major topics deals with the notion of mankind, man and animal relationship and situation.

I don’t intend to discuss here the provocative quality of this artist’s work, but if social order was damaged at the FIAC, which is not exactly a nursery, I suggest that our benevolent state authorities burn down all mythologic texts in public libraries, and withdraw from public gardens and museums walls the representations inspired by this zoophilic legends.

I have some propositions : 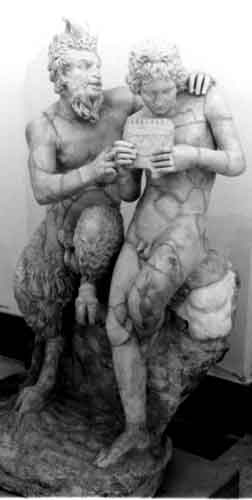 Pan teaching flute (and God knows what else) to a very young Daphnis. A marble Roman copy of a Greek sculpture ( Heliodore III century B.C.), found in Pompei and exhibited in Naples National Acheological Museum.

Io and Zeus (half bull, half cloud) by Il Coreggio, 1530, are giving a terrible example ( though very hard to imitate) in Wien Kunsthistorisches Museum, Gemälde Galerie.

Leda and the Swann,   Veronese workshop, circa 1560, Fesch Museum, Ajaccio.

Le Minotaure et sa Femme (1937) as well as the Faune blessé (1939) by Pablo Picasso are part of the exhibition Picasso et les Maîtres in Paris Grand Palais, which runs up to February 2, and if the vice police squad does nothing about it, millions of people will have look at these.

If you wish to see Oleg Kulik‘s censored photos, go to http://www.photo.fr/blog/31-Censure-a-la-FIAC-2008-Les-photos-interdites-de-Oleg-Kulik.html

And if you’re interested in uncorrect contemporary art, you may go to http://www.rabouan-moussion.com/ or pay a visit to the gallery, 121 rue Vieille du Temple 75003 Paris, metro Saint-Paul.

This entry was posted in art, events, exhibitions, museums, way of life. Bookmark the permalink.